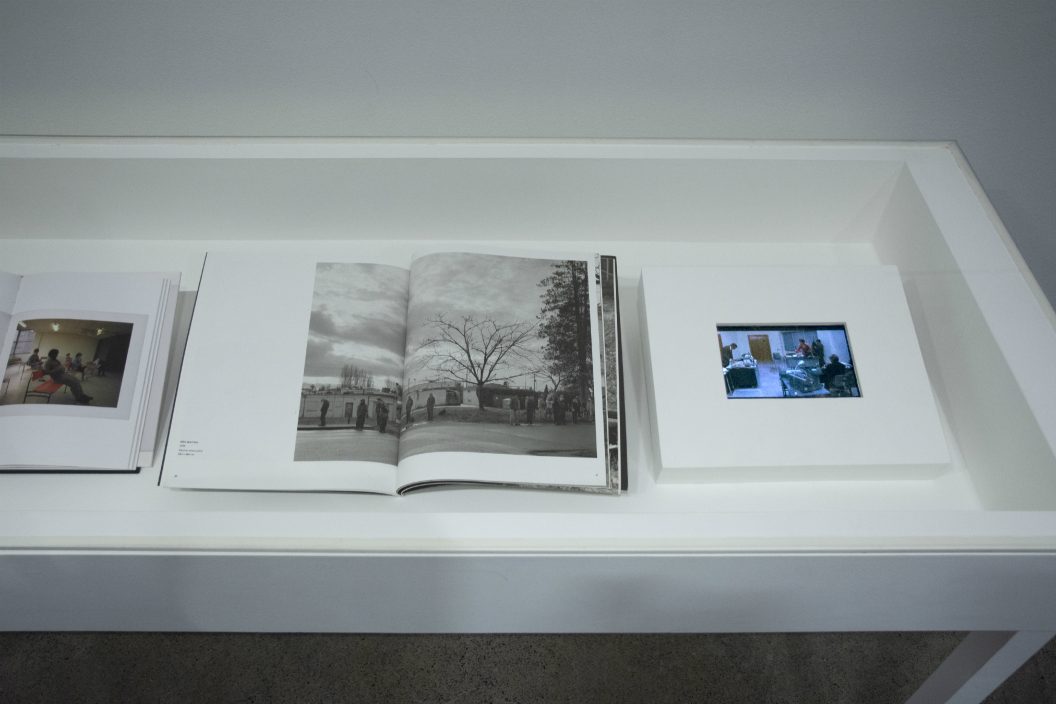 Galerie de l’UQAM launches the year 2019 with Waiting, a rich group exhibition bringing together artists from Québec, England, India and Germany. Curated by Fabrizio Gallanti, Waiting questions the place and value of time in our contemporary capitalist system.

Waiting (L’attente) is an exhibition that delves into our intimate relationship with time, in particular time spent working, and the pivotal place it holds in our lives. The readings and diverse reimaginings of waiting proposed by the many artists included here show us attempts at understanding it and reckoning with its layered significance.

We just have to learn to manage our time better, it is often said. Time management will improve our productivity, enhance control, and ensure success in our lives. We are expected to maintain a savvy balance between (productive) time spent working and the “down-time” that we spend on ourselves. We have to capably procure our creature comforts, while also perfecting our personalities, which in turn manifest as our being-in-the-world, proof and proffering of the accomplished, gratified multitaskers we have become. It is also a given that every temporal unit of measurement – a week, a day, an hour, “just few minutes!” – can be accorded a monetary value. Indeed, much of our relationship with money is a function of mathematic calculations that are applied to units of time.

And so, we wait: to hear back about a job, an application, an appointment with some civil servant or another, or for some professional service. We savour our break time before getting back to work, or spend them in worry or dread. Sometimes, the primary activity of a given task is itself merely waiting. This very separation between periods of action and waiting can reflect class divisions as well: first in line (or relieved of having to wait in line at all) are the privileged ones; the rest of us have no choice but to stand, and wait.

Combining pre-existing and new artworks, as well as archival documents, Waiting provides a space for dialogue and reflection on granular time, as seemingly unspectacular as it is complex. Through the artists’ attentions and attempts, this exhibition shows us the analytical and creative elements of aesthetic experience, while holding space for subversion and critique. Only time will tell what great liberation we might enjoy when the time we have spent waiting is restored to us, and our latency is no longer controlled by outside forces.

Fabrizio Gallanti has wide-raging and international experience in architectural design, education, publication, and exhibitions. He holds a Ph.D. in Architectural Design from the Politecnico di Torino (Turin, Italy, 2001) and an M. Arch. from the University of Genoa (Italy, 1995). He has taught in Canada, Chile, Italy, the United Kingdom and the USA. In 2014, he was the first Senior Mellon Fellow at the School of Architecture of Princeton University. He currently teaches at the School of Architecture of McGill University in Montréal and the Architectural Association in London. From 2011 to 2014, he was the Associate Director Programs at the Canadian Centre for Architecture in Montréal. Between 2007 and 2011, he was the Architecture Editor at Abitare Magazineand Chief Editor of the Abitare website. He is a regular contributor to architecture magazines such as Harvard Design Magazine, Interwoven and San Rocco. In 2016, he edited the book MCHAP: The Americas for IIT/Actar. Together with Francisca Insulza, he is the founding partner of the Montréal-based architectural research studio Fig Projects (2003-present). In 2016, Fig Projects curated the exhibition The World in Our Eyes for the 4th Lisbon Architecture Triennale. Fig Projects is currently researching the relationship between architectural design and labour.

Jeremy Deller lives and works in London. He studied Art History at the Courtauld Institute and at Sussex University. Deller won the Turner Prize in 2004 for his work Memory Bucket and represented Britain in the 55th Venice Biennale in 2013 with his project English Magic. He began making artworks in the early 1990s, often showing them outside conventional galleries. Deller has exhibited extensively worldwide with selected solo exhibitions including: Skulptur Projekte Münster (2017); The Infinitely Variable Ideal of the Popular (CA2M, Madrid, 2015; touring to MUAC, Mexico City; Fundación Proa, Buenos Aires; and Azkuna Zentroa, Bilbao); Joy in People (Hayward Gallery, London, 2012; touring to the Institute of Contemporary Art, University of Pennsylvania; and the Contemporary Art Museum St-Louis); It Is What It Is: Conversations About Iraq, (New Museum, New York, 2009; touring to Hammer Museum, Los Angeles; and Museum of Contemporary Art, Chicago), Deller has curated numerous projects, including Iggy Pop Life Class (Brooklyn Museum, 2016) and Love Is Enough: William Morris and Andy Warhol (Modern Art Oxford, 2014).
jeremydeller.org

K. Deepika, A. Kameshwaran, M. Sinduja, A. Thalamuthu and K. Padmapriya are recent graduates of the Government College of Fine Arts in Chennai (India). Their collective work presented in Waiting was created during their studies for the exhibition Archiving Labour, curated by Professor Krishnapriya CP. This exhibition, which brought together 33 students, was part of the Students’ Biennale 2016-2017, presented in parallel with the Kochi-Muziris Biennale (Kochi, India). The students explored the history of their college by reflecting on the interweaving of work and colonization in the establishment of this institution.

In addition to their individual practices, Jean-Maxime Dufresne and Virginie Laganière have been working as a duo for some fifteen years. Their artistic research is concerned with the transformation of our constructed environments and their social realities as well as with various forms of speculation about the future, with a sensitivity for the human psyche and socio-political climates. In an anthropological fashion, their work is embodied in a multifaceted approach that combines installation, photography, video, sound creation and the development of devices and sculptural elements. By blurring the lines between documentary and fiction, various narrative strategies are advocated in the interpretation of reality in order to deploy an imaginary that enables the public to project itself. Developed in creative residencies that include HIAP (Helsinki International Artist Programme, 2016) and the Inside-Out Art Museum (Beijing, 2013), their work has been the subject of numerous solo exhibitions, including Normal Times. La vie minérale (L’œil de poisson, 2018); Olympic Afterlife (Maison de la culture Côte-des-Neiges, 2017; 3331 Arts Chiyoda, Japan, 2015; VU, 2014) and Blind Signal (Titanik Gallery, Finland, 2014). In addition, it has been integrated in several group shows, including Art souterrain (2015), Manif d’art 7 (The Québec City Biennale, 2014) and ABC: MTL (Canadian Center for Architecture, 2013). The work presented at Galerie de l’UQAM was initiated during a residency at TOKAS (Tokyo Arts and Space, 2018), with the support of the Canada Council for the Arts.
jmdufresne.ca | virginielaganiere.com

A couple in personal life and a collaborative team of like-minded producers at the same time, Antje Ehmann and Harun Farocki joined forces in numerous artistic and curatorial projects since the late 1990s. After working together on film programs for different exhibitions and institutions, their first collaborative endeavor was the landmark exhibition Cinema Like Never Before (Generali Foundation, Vienna, 2006; Akademie der Künste, Berlin, 2007) where they sought to create a third space beyond the museum and the cinema. Another important curatorial project aimed at the intersection of military and mass media images of war and their critical-reflective counterparts in the practice of contemporary artists, resulting in the exhibition The Image in Question. War – Media – Art (Carpenter Center for Visual Arts, Cambridge, USA, 2010) and the subsequent Serious Games. War – Media – Art (Mathildenhöhe, Darmstadt, 2011). Ehmann and Farocki also have individual practices. Antje Ehmann is a curator, author and artist. Harun Farocki is a film maker and video artist with an oeuvre that comprises more than 100 feature films, essay films, documentaries, and video-installations. He was one of the most important directors in Germany at the time of his death, in 2014.
harunfarocki.de

Emmanuelle Léonard lives and works in Montreal. She holds a BA from Concordia University and a MA from Université du Québec à Montréal. Her work has been featured in numerous solo and group exhibitions, including at Art Gallery of Ontario (2012), Musée d’art contemporain de Montréal (À la recherche d’Expo 67, 2017; Territoires urbains, 2005), Fresnoy – Studio National des Arts Contemporains (À Montréal, quand l’image rôde, 2013-2014), Galerie de l’UQAM (The Disorderliness of Things, 2015), Kunsthaus Dresden, Neuer Berliner Kunstverein, Mercer Union (Toronto), Optica and VOX – Centre de l’image contemporaine. She regularly participates in collective events such as the Daegu Photo Biennale (South Korea, 2017), Biennale de Montréal (Looking Forward, 2014), Mois de la photo à Montréal (2007, 2009) and Quebec Triennial (The Work Ahead of Us, 2011). She is a recipient of the 2005 Pierre Ayot Prize and a finalist of the 2012 AIMIA | AGO Photography Prize. In 2018, she is in residence with the Canadian Armed Forces as well as in Bogotá, through an agreement between the Colombian Ministry of Culture and the Conseil des arts et des lettres du Québec. In the fall of 2019, Galerie de l’UQAM will organize a major solo exhibition for Léonard, curated by Louise Déry.
emmanuelleleonard.org

An artist and a doctor, Alain Parent has been splitting his medical practice for more than 20 years between the Hôtel-Dieu emergency room in Quebec City and various Inuit communities in Nunavik, interspersed with humanitarian missions overseas with the Red Cross in recent years. In the margins of medicine, but always in connection with his meetings and travels, his artistic practice was initially oriented towards a fairly classic portrait and landscape photography. The interdisciplinary master’s degree in art he completed in 2016 marked a turning point in his career as an artist and doctor, since art and medicine now coexist in a newly developed area of ​​research and creation. Produced in the full exercise of medicine, often in the emergency room, his oeuvre draws from his daily caregiving, sometimes at the limits of ethics and institutional constraints, imbued with the unexpected, inhospitable and undecidable. The results of his research at the master’s level were shown at Galerie des arts visuels (Université Laval, 2016). His latest research and creation project, Art and Medicine in a Nordic Sociocultural Context, was undertaken in the fall of 2017 as part of his doctoral degree in the Faculté d’aménagement, d’architecture, d’art et de design at Université Laval.

Our mediators look forward to taking you and your group on guided tours of our exhibitions. The tours are flexible and open to all school and community groups. Their content can be adapted to meet your particular needs and to complement material covered in the classroom. These activities are available anytime, in French or English, free of charge.