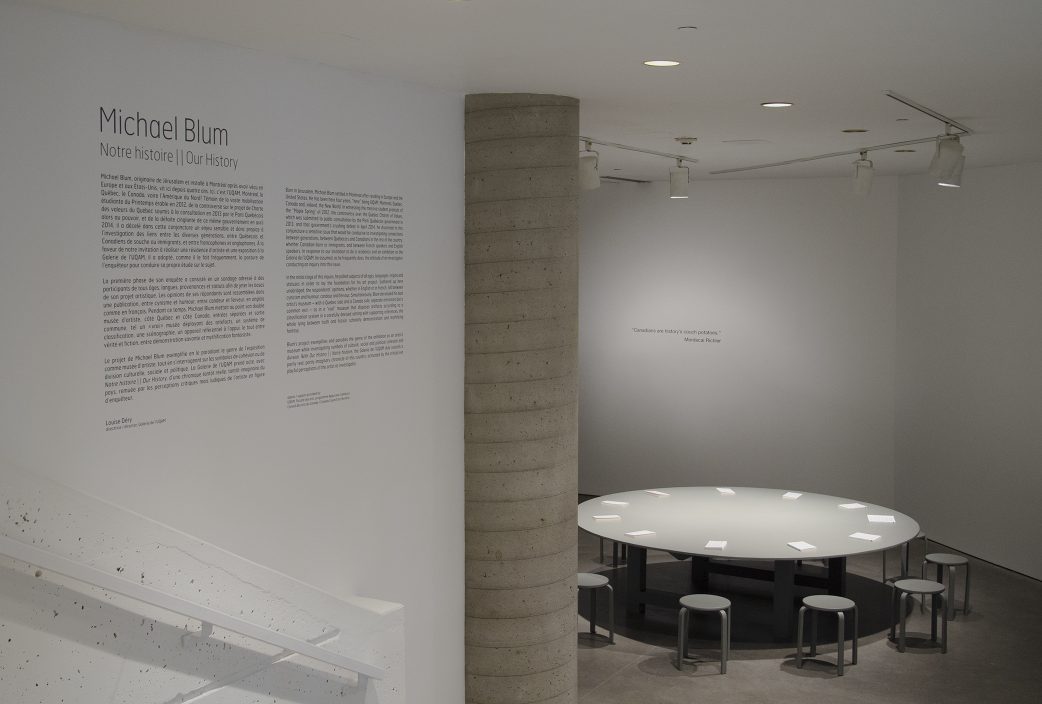 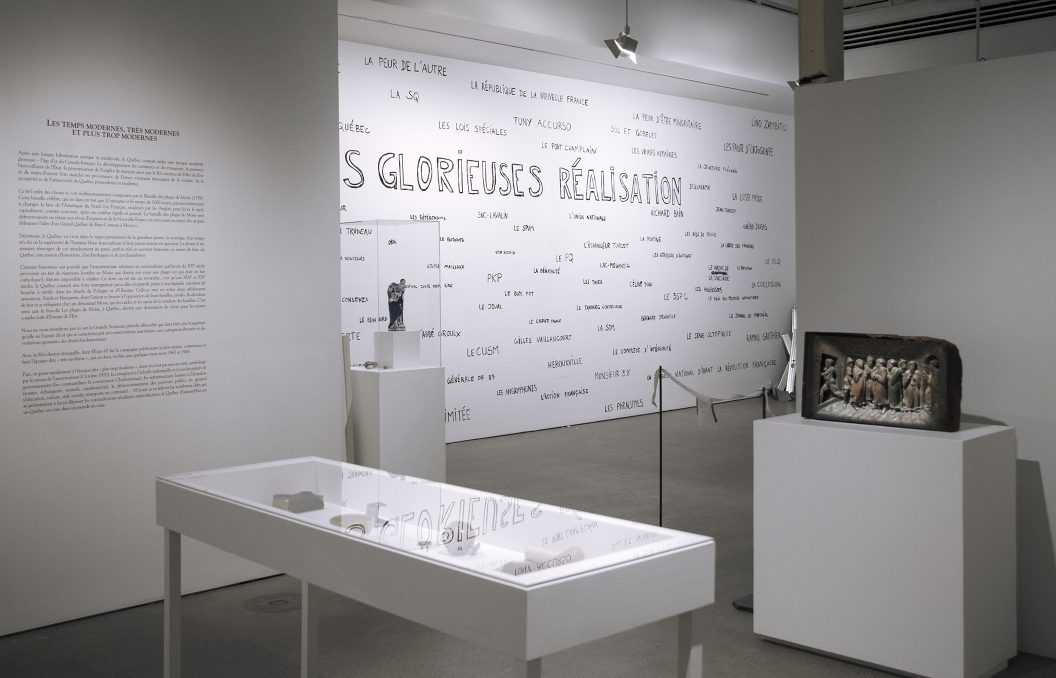 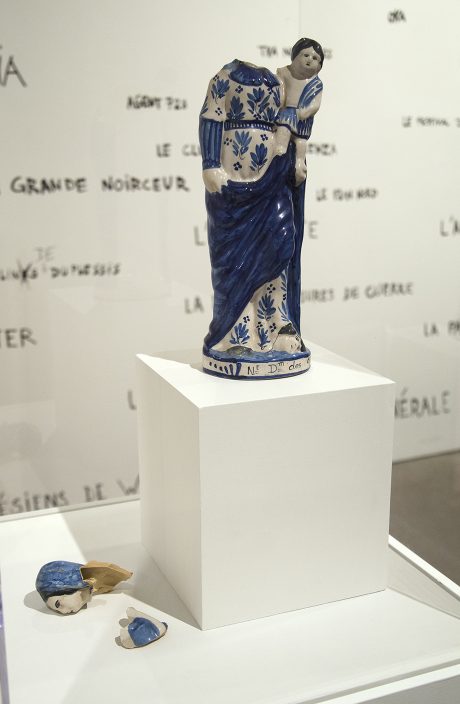 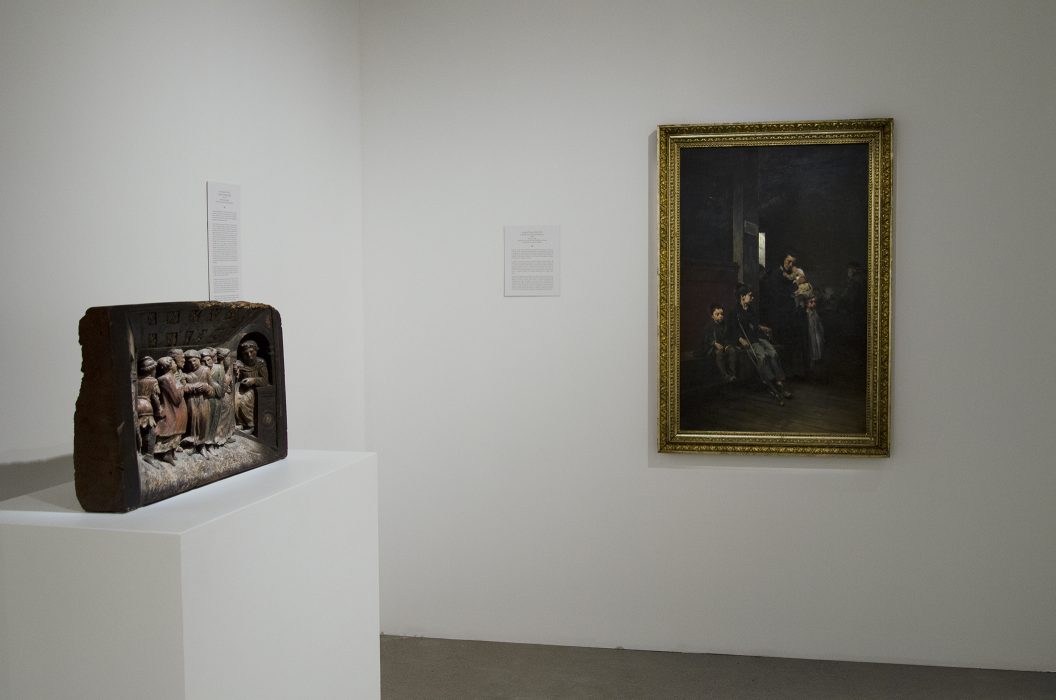 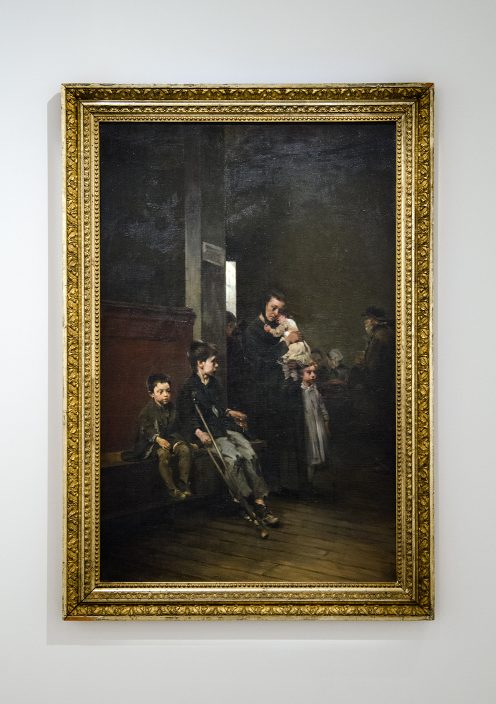 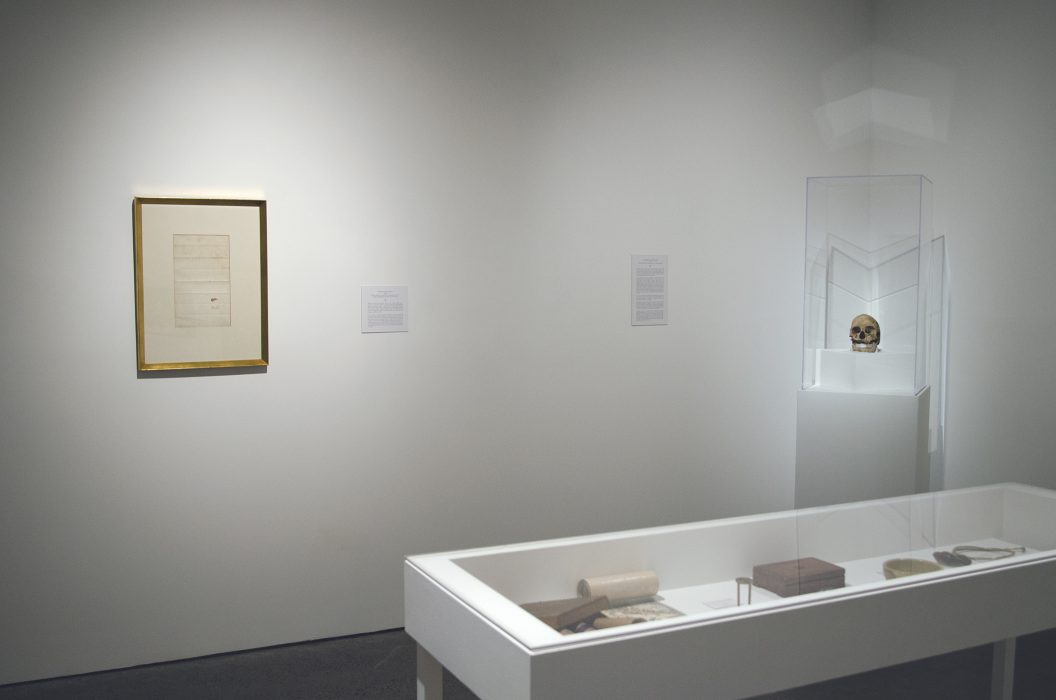 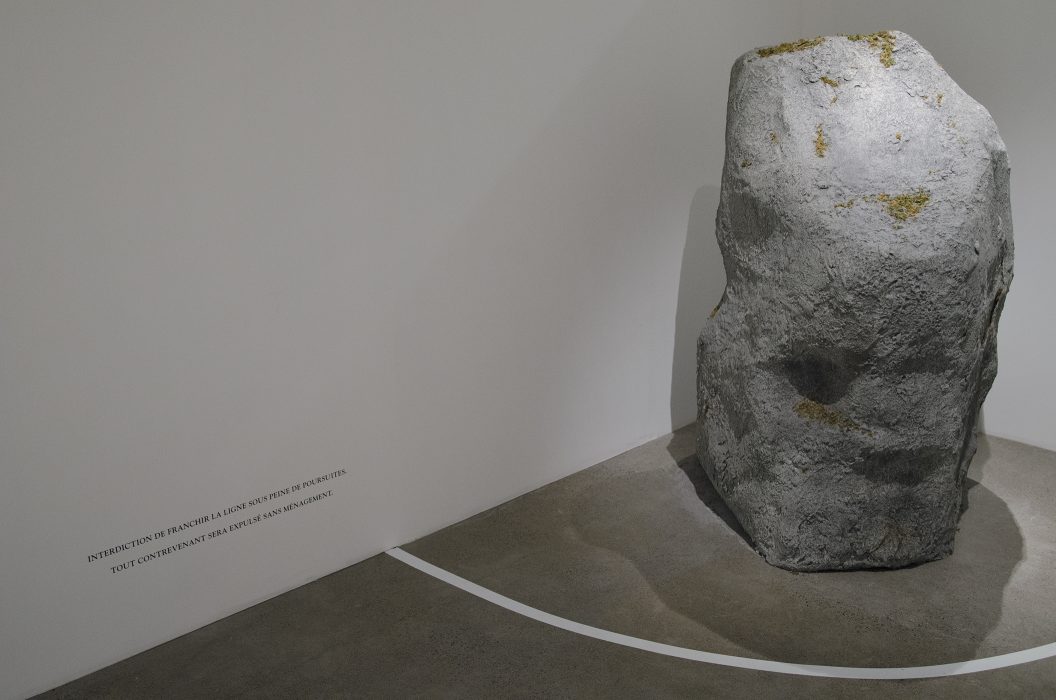 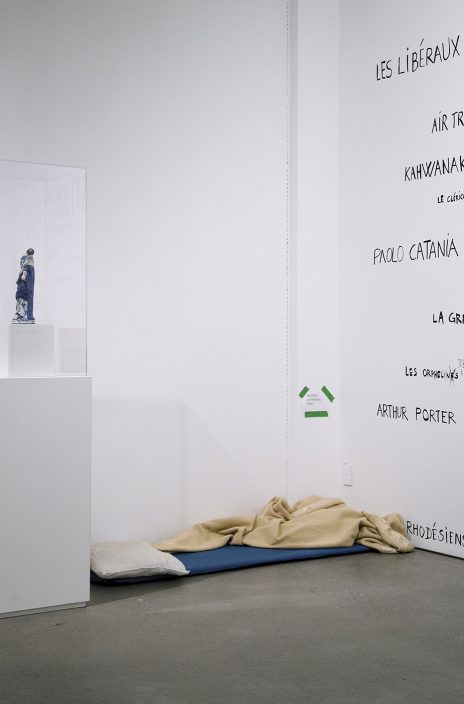 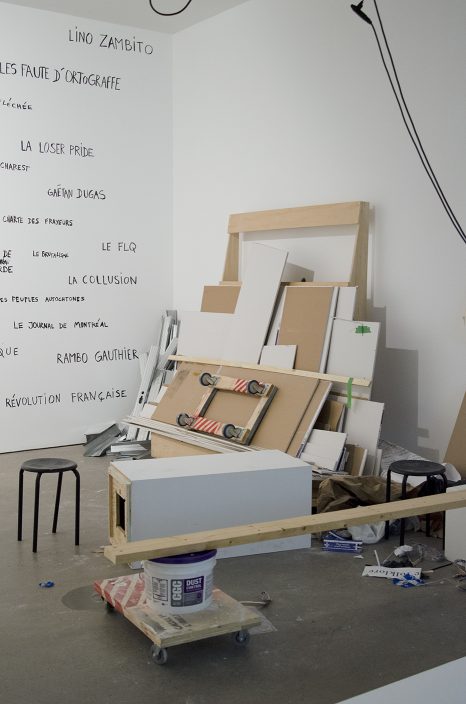 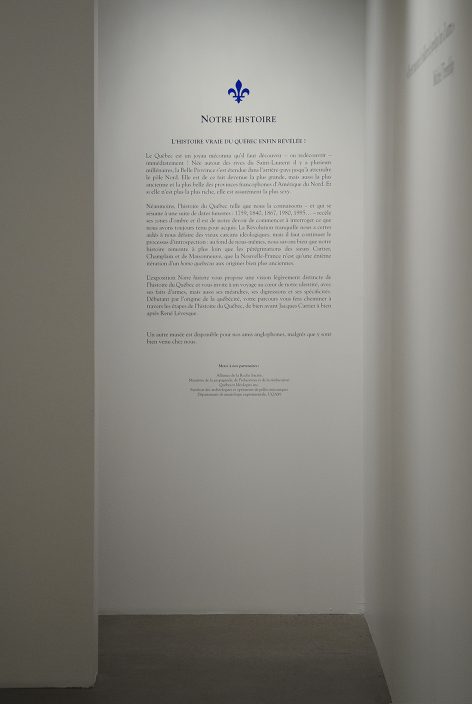 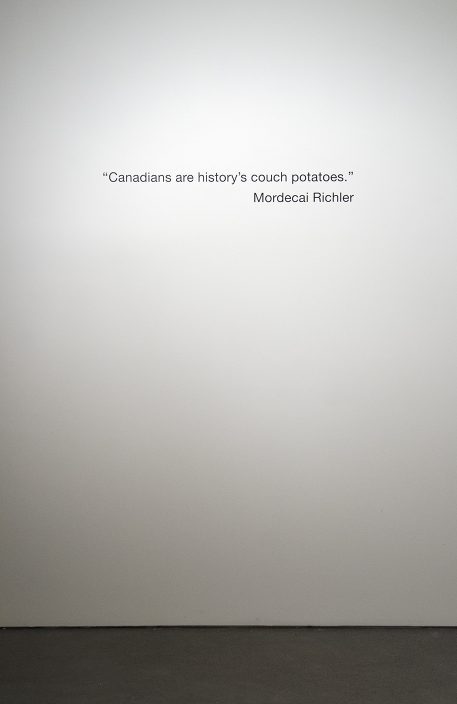 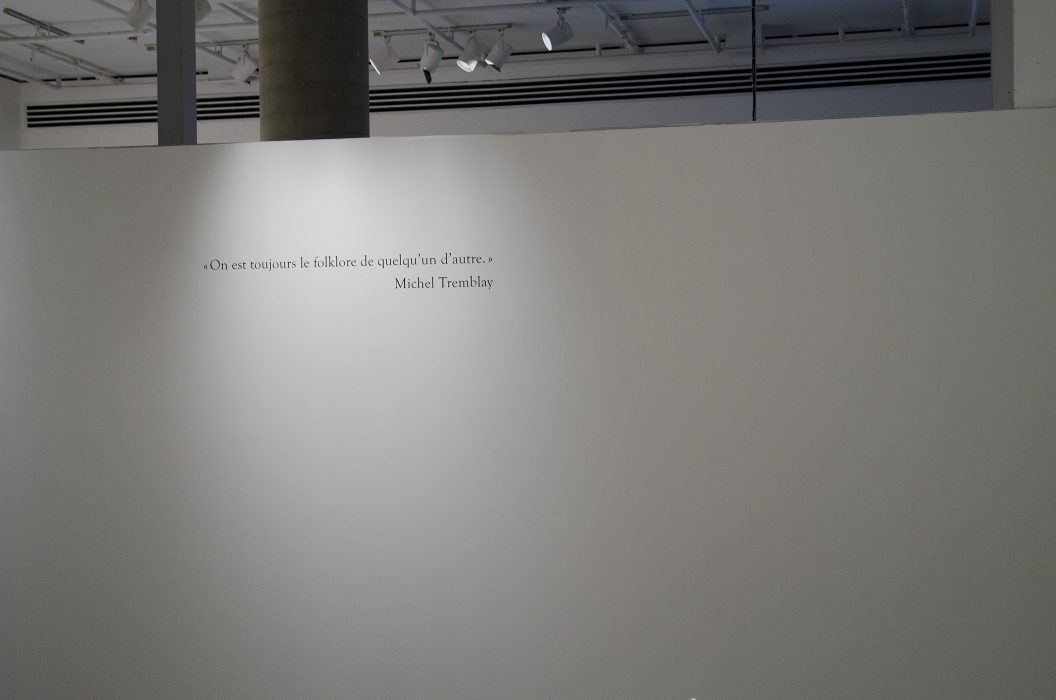 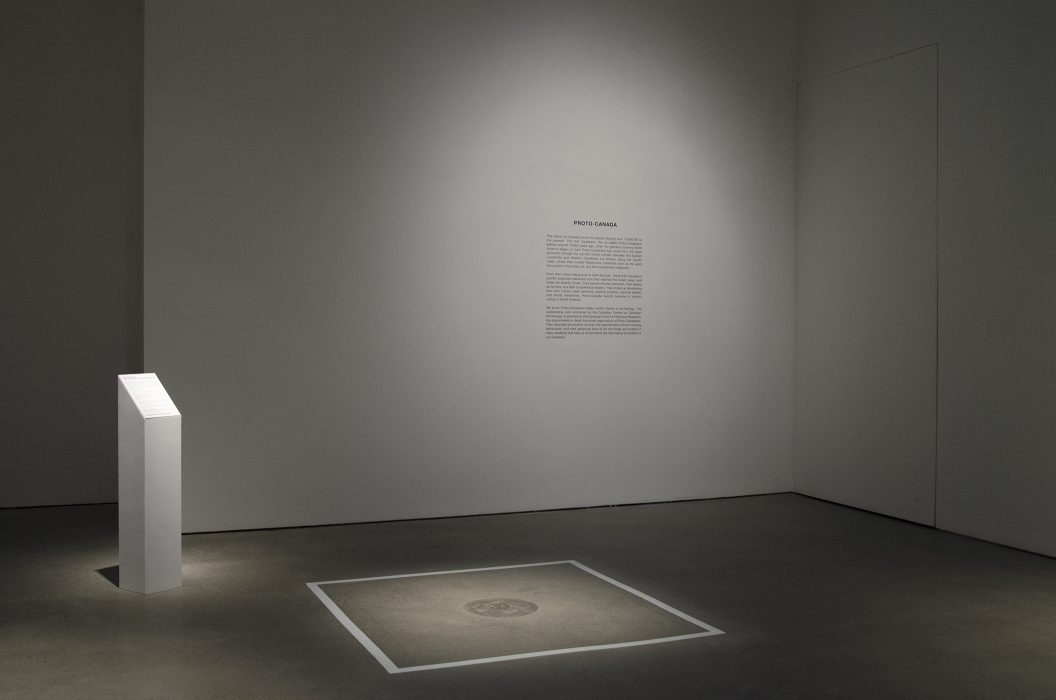 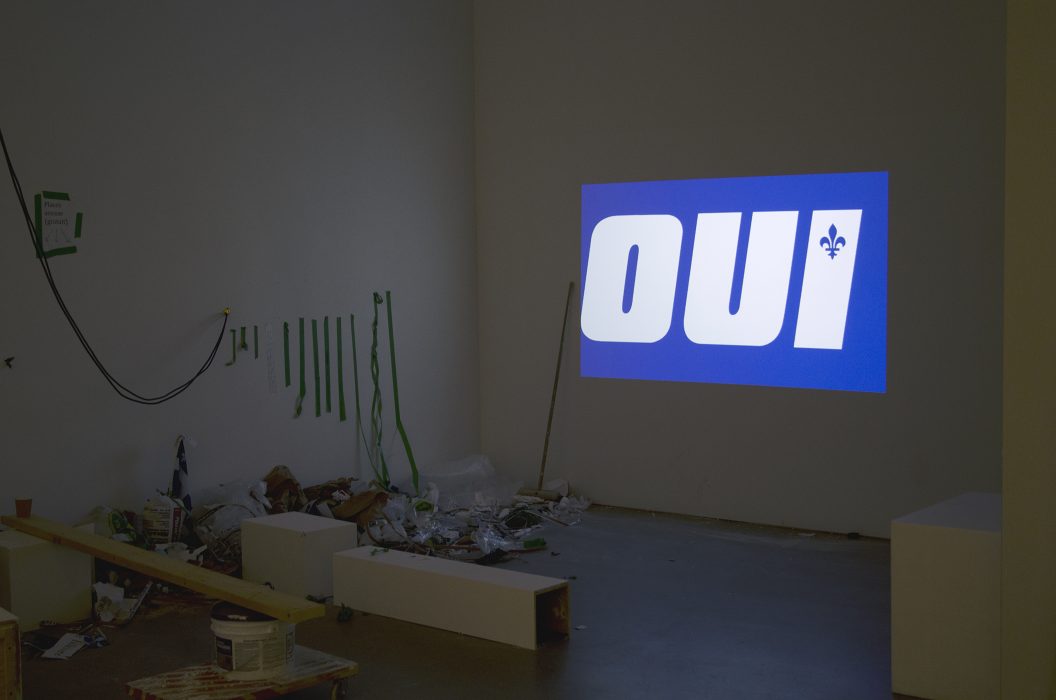 Our History | | Notre histoire is a project by artist Michael Blum on the issue of Quebec and Canadian identity. The exhibition is the result of work carried out under the Galerie’s summer residency program. The artist has set up a museum in the exhibition hall, offering a fanciful rewriting of the history of Quebec and Canada, in addition to a publication containing the responses of 86 people to a survey on their vision of identity.

Born in Jerusalem, Michael Blum settled in Montreal after residing in Europe and the United States. He has been here four years, “here” being UQAM, Montreal, Quebec, Canada and, indeed, the New World. In witnessing the massive student protests of the Maple Spring of 2012, the controversy over the Quebec Charter of Values, which was submitted to public consultation by the Parti Québécois government in 2013, and that government’s crushing defeat in April 2014, he discerned in this conjuncture a sensitive issue that would be conducive to investigating connections between generations, between Quebeckers and Canadians in the rest of the country, whether Canadian-born or immigrants, and between French speakers and English speakers. In response to our invitation to do a residency and an exhibition at the Galerie de l’UQAM, he assumed, as he frequently does, the attitude of an investigator conducting an inquiry into this issue.

Inspired by his own immigrant experience, Blum developed his dual artist’s museum – with a Quebec side and a Canada side, separate entrances but a common exit – as in a “real” museum that displays artifacts according to a classification system in a carefully devised setting with supporting references, the whole lying between truth and fiction, scholarly demonstration and mythifying fantasy.

The museum as an artist’s work is of incontestable interest to a university gallery that focuses on multifarious and changing considerations of exhibition practice and the application of knowledge produced in the museum realm. In this regard, Blum’s project is doubly interesting in that it exemplifies and parodies the genre of the exhibition as an artist’s museum while investigating symbols of cultural, social and political cohesion and division. The result of displaying the recent work of such an artist in the context of an artist residency is exposure to both the project’s conceptual development and its material realization. With Our History || Notre histoire, the Galerie de l’UQAM duly records a partly real, partly imaginary chronicle of this country, activated by the critical yet playful perceptions of the artist as investigator.

In addition, the artist developed a survey—”non-scientific” by his own admission—addressed to more than 600 more or less public figures in politics, the arts, journalism and academia, to help establish a conceptual framework for his artistic project. The exhaustive views of the 86 respondents are collected in a publication that runs between cynicism and humour, candour and fervour, in English and French. They formed a kind of field of reflection on daily life. The publication is neither an exhibition catalogue nor an essay, but rather the report on research conducted by the artist with the goal of examining the history of his host country in the light of certain current events that exposed him to the dizzying notion of “identity”. The book reveals the answers to the following questions:

Since 2009, the Galerie de L’UQAM has extended an invitation to artists in residence. This biennial formula allows an artist to work in the Galerie spaces for an entire summer and exhibit the results of the research at the start of fall programming. The program comes under the mandate of the institution, which seeks to demonstrate the dynamic relationship between exhibiting and publishing, between displaying and interpreting. It is possible to see the outcome of the two previous residencies: David Sprigg, in 2009, and Stéphane Gilot, in 2011.

The exhibition and publication are made possible thanks to the financial support of the Canada Council for the Arts and the Université du Québec à Montréal, Faculté des arts, programme d’appui aux créateurs.